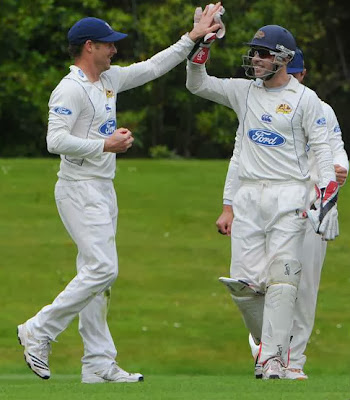 Top-order batsman Aaron Redmond has earn a New Zealand test recall, 5 years after he last played the longest form of the game, for the series against West Indies that starts next week. The 34-year-old has been named in a 13-man squad for the 3-match series that starts at the University Oval in Dunedin on December 3 apparently to provide cover for the injured Kane Williamson who broke his thumb last month.

Redmond, who last played a test against Australia in 2008, has been in good form in Plunket Shield first-class cricket for the past 2 seasons and batted well in a warm-up match in Christchurch.

Aaron has made an excellent start to the Plunket Shield to date and on top of the 67 he scored yesterday for the New Zealand XI we felt he was the best top order batting cover, selection manager Bruce Edgar said on Friday.

Williamson broke his thumb on the tour of Bangladesh and medical staff had thought his injury may take up to six weeks to heal. He will feel a fitness check before the team is finalized. Kane has been in the nets batting and bowling and getting his strength levels up, Edgar said.

Pace bowler Tim Southee is also back in the squad after ankle surgery in July. He was gradually eased back when he played in the limited- overs portion of New Zealand's tour to Bangladesh.

All-rounder Corey Anderson has also been included but is battling against a rib injury he continued in Bangladesh and may play as just a batsman in Dunedin if the home side decides to pick an all-seam attack and not include leg-spinner Ish Sodhi.

The 20-year-old Sodhi impressed on the Bangladesh tour and Edgar said if the conditions suited him he would be given another chance.

Williamson, if fit, is likely to fill the spinning role if New Zealand go with a four-pronged pace attack of Southee, Trent Boult, Neil Wagner and Doug Brace well.
Posted by Unknown at 4:42 AM No comments: 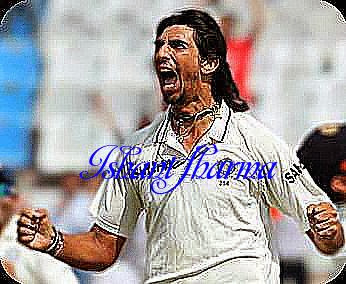 Haryana might not have the best batting line-up in the domestic circuit, but a 5-wicket haul at the Ranji Trophy level can never be undermined.

And on Friday, Delhi pace bowler Ishant Sharma showed at the Roshanara Club Ground in the Capital that he still has it in him to ruffle a few feathers when he has his head in the right place.

Bowling an spotless line and getting some disconcerting bounce from just short of the excellent length area, he in partnership with Rajat Bhatia ensured that the visitors managed just 138 in their 1st essay, after Delhi folded up for 201 in their first essay.

Delhi had a lead of 98 by the time stumps were drawn on the second day. Gambhir (26) and Unmukt Chand (9) were at the crease with Delhi team score in the second innings reading 35/0.

As Coach Sanjeev Sharma had told MAIL TODAY on Thursday, Ishant Sharma would be the difference between the two sides. While he started off waywardly in the first over, he looked a totally different bowler second over onwards.

With the wicket at the Roshanara known to favour the pacers also one of the major reasons why captain Gambhir wanted to play here all Ishant Sharma did was bowl in the right areas and let the ball do the rest. Pitching the ball constantly outside the channel of uncertainty slightly outside the off-stump he kept extracting disconcerting bounce.

And all time he pitched the ball up, it swung viciously.

The fact that Joginder Sharma (35) was the highest scorer for Haryana clearly shows poor application by the visitors batsmen.

Ishant Sharma (5/29) was ably supported by Rajat Bhatia (4/32) and Parvinder Awana (1/32). Awana was really unlucky as he kept troubling the Haryana batsmen, without much reward.

Posted by Unknown at 8:31 PM No comments:

Ishant and Vinay Kumar Out against WI ODI Series 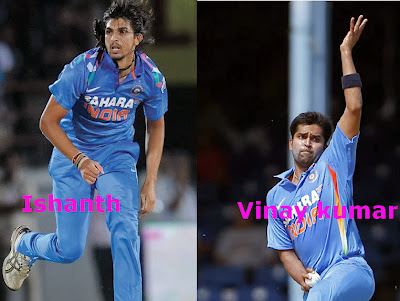 After some disastrous performances against Australia, Ishant Sharma and Vinay Kumar have lost their replace to Dhawal Kulkarni and Mohit Sharma for the upcoming ODIs against the West Indies match India Squad.

Its Kulkarni is first time call to the Indian team while Mohit had made his ODI debut on the recent tour of Zimbabwe. Their performances in the recent Ranji Trophy in Lahli game were noticeable: Kulkarni shared a match-winning partnership with Sachin Tendulkar, whose wicket had been claimed by Haryana team player Mohit in the first innings. In pace-friendly and cold conditions, the 2 delivered with both bat and ball in this game.

Ishant Sharma conceded 30 runs in an over in the Mohali ODI, letting a sure victory slip out of India hands. Later in the series, Vinay kumar became the first Indian bowler to concede over a hundred runs in an ODI in Bangalore.
Posted by Unknown at 5:17 AM No comments:

Michael Clarke Could Come Back Against Eng Series 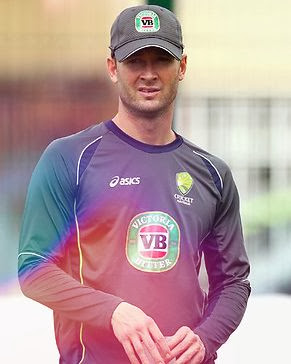 Australian captain Michael Clarke could return from injury as early as next week in a major boost on the eve of arch-rival England's arrival for the Ashes series.

The Australian batsman was ruled out of Australia one-day tour of India(October) this month with a long-standing back problem, and feared he could miss the first Test against England starting on November 21.

But after serious treatment on a degenerative disc problem, which has been an issue since he was a teenager, the prognosis is good. Michael is progressing well and in recent recommenced batting in the nets, Australian team physiotherapist Alex Kountouris said.

At this stage we are aiming to have him fit to play the second round of the Sheffield Shield, but we have not ruled out the option of him playing the first round of the Shield season if he makes better than expected progress. Michael Clarke state side New South Wales start their Shield season at home on October 30 against Tasmania, and then play Victoria in Melbourne from November 6.

Michael Clarke is back problem flared up again before Australia final ODI in Southampton last month at the end of a grueling 5-Test Ashes tour to England, which Australia lost 3-0.He played in that game, but selectors were reluctant to take any more risks given the big home summer coming up, and ruled out him out of the India tour.
Posted by Unknown at 5:41 AM No comments: 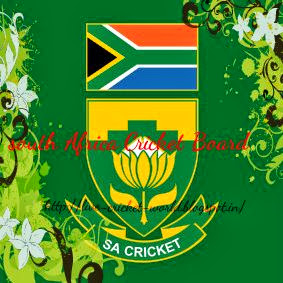 South African cricket officials are set to consider a proposal forcing professional franchises to include at least 2 black Africans in all team. Another item expected to be discussed at an October 11 Cricket South Africa meeting will be the need for second-tier, semi-professional provincial sides to select 3 black Africans.

South Africa Cricket have not commented officially on the proposals, but an official who attended new transformation talks told AFP both issues would be debate. While the 6 top-tier franchises have picked numerous mixed-race or Asian-origin cricketers in recent seasons, there has been a dearth of black Africans on view.

Fast bowler Makhaya Ntini carried the black African banner in the Test, one-day international and Twenty20 teams for many seasons.

Since Ntini retired 2 years ago, black African fast-medium bowler Lonwabo Tsotsobe has been in and out of Proteas teams in various formats. Faced with constant criticism for not picking black Africans, national selector’s convener Andrew Hudson has pointed to a shortage of stars from that race group.
Posted by Unknown at 5:31 AM No comments:

Posted by Unknown at 3:11 AM No comments:

Posted by Unknown at 3:05 AM No comments: